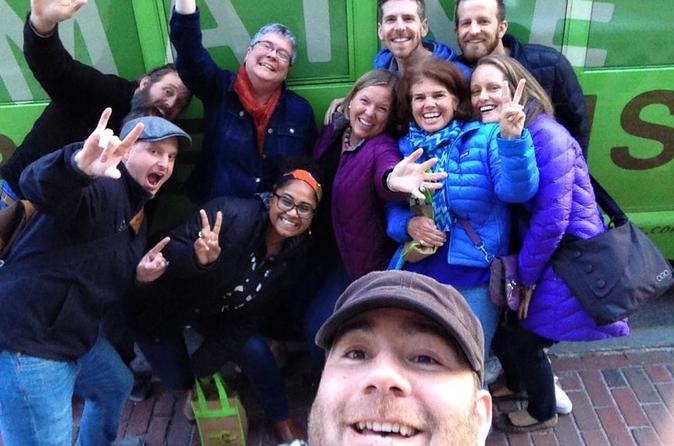 If you think it's never too early to start drinking great local beer, then this Brewery Brunch tour is perfect for you! Leave the mimosas behind and hop on the bus to check out three trendsetting breweries located in lively Portland neighborhoods.

First up is Bissell Brothers Brewing Co. Bissell Brothers Brewing Co. has a brand new location for their brewery at Thompson's Point. Peter and Noah Bissell, the eponymous Brothers, made a splash in late 2013 when they released their first full-production offering: The Substance Ale. Mainers and visitors alike have been clamoring for their hop-forward American ales, and this amazing new space will increase production by 40% to provide all of us with more Bissell beer.

For our next stop , we'll be visiting Rising Tide Brewing Co. The name of Rising Tide Brewing Company, inspired by the famous quote, “A rising tide lifts all boats,” encapsulates the collaborative spirit of the craft beer industry. This husband- and wife-owned brewery was founded near Allagash in 2010, and moved to the now-bustling East Bayside neighborhood in 2012. They have experienced tremendous growth with the popularity of their core beers like Zephyr and Maine Island Trail Ale. After remodeling and expanding their tasting room, they saw on-site revenue increase by 50 percent. They have expanded yet again, now with a dedicated space for experimental beers brewed with wild yeast and souring bacteria, more space in their existing 5,500 square foot production floor, and an area for private events in a community room.

Last but definitely not least, we will stop at Lone Pine Brewing Co. After working in the retail side of beer for over a decade, Tom Madden decided that the time was right to break into producing his own beer. A long-time home brewer and Certified Cicerone, he reconnected with his longtime friend John Paul who had been working in the music industry in California. Together, they opened Lone Pine in March of 2016 in a former countertop production space in Portland’s East Bayside, and they are churning out American-style Pale and Wheat Ales for retail sale and enjoyment in their elevated tasting room.

Even the snack for this tour is brunch related, as you will enjoy a locally baked breakfast-themed hand pie from our friends at Ten Ten Pie.

After the tour, we’ll drop you back off at Old Port Spirits and Cigars to grab some bottles and cans before continuing your exploration of lively downtown Portland.

Please note that tour stops may change without notice due to events and availability of staff at each venue.

If you think it's never too early to start drinking great local beer, then this Brewery Brunch tour is perfect for you! Leave the mimosas behind and hop on the bus to check out three trendsetting breweries located in lively Portland neighborhoods.